Recurrent ear infections are the bane of many children—and the parents who have to deal with their care. Now, research suggests that naturally occurring, “helpful” bacterial colonies in the ear—called “microbiomes” by scientists—may help decide a person’s vulnerability to these infections.

“The children and adults with normal middle ears differed significantly in terms of middle ear microbiomes,” concluded a team of Japanese researchers led by Dr. Shujiro Minami of the National Institute of Sensory Organs in Tokyo.

One expert in the United States said the study is an important first step in learning more about ear infections.

“What this study tells us is that we have lots of bacteria living in our middle ears, regardless of whether or not we have chronic ear infections,” said Dr. Sophia Jan, chief of pediatrics at Cohen Children’s Medical Center in New Hyde Park, N.Y. “The study suggests that some kinds of bacteria don’t seem to cause us problems when present in our middle ear.”

However, “we still have a lot to learn before we can apply this research to the treatment or prevention of chronic ear infections,” she added. “We don’t know if the bacteria found in ‘healthy’ ears can be problematic, for example, if present in higher quantities.”

Ear infections “are the most common reason parents bring their child to a doctor,” according to the U.S. National Institute on Deafness and Other Communication Disorders. These bacterial infections—called otitis media—typically start in the middle ear, and 5 out of 6 kids will develop at least one ear infection by the time they turn 3.

In the new study, Minami and colleagues wanted to see what role the ear’s microbiome might play in these outbreaks. To do so, they took swab samples of the middle ears of 155 children and adults who were having ear surgery due to recurrent ear infections (88 cases) or some other condition.

Among patients with a history of ear infections, the researchers found significant differences in the makeup of microbial communities for people with active (“wet”) or inactive (“dry”) inflammation.

In fact, people whose ear infection was dormant “had similar middle ear microbiomes as the normal [no ear infection] middle ears group,” the researchers said. 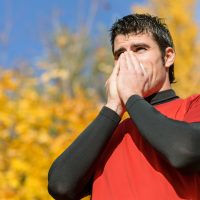 Chronic rhinosinusitis is a misery-generating condition – literally. According to a large study just published in The ...
Read more