A Molecular Reason Why Obese People Have Trouble Losing Weight

Obesity rates in the U.S. and abroad have soared: The world now has more overweight people than those who weigh too little. One reason relates to the way the body reacts to its own fat stores by setting in motion a set of molecular events that impede the metabolic process that normally puts a damper on hunger.

A new study published August 22 in Science Translational Medicine provides details of how this process occurs, giving new insight into why obese individuals have trouble shedding pounds. It also suggests a possible treatment approach that targets obesity in the brain, not in the belly.

Scientists have long known that a hormone called leptin is instrumental in regulating the human diet. Produced by fat cells, the molecule communicates with a brain region called the hypothalamus, which reins in hunger cravings when our energy stores are full.

Yet as we gain weight our bodies become less sensitive to leptin, and it becomes harder and harder to slim down. In other words, weight gain begets more weight gain. In an experiment using mice that became obese on a high-fat diet, an international team found obesity increases the activity of an enzyme called matrix metalloproteinase-2, or MMP-2. By using a technique called western blot analysis—separating and identifying all the proteins in a tissue sample—the authors found MMP-2 cleaves off a portion of the leptin receptor in the hypothalamus, impairing the hormone’s signaling and its ability to suppress appetite.

The study also revealed that disabling MMP-2 with a gene-silencing technique—one in whicha stretch of RNA was injected directly into the hypothalamus—had the effect of reducing weight gain in obese mice and preventing leptin receptor cleavage. Conversely, viral delivery of MMP-2 to the same brain region promoted subsequent weight gain and the snipping off of receptors. “The concept of ‘leptin resistance’ was already known in the field,” says paper co-author Dinorah Friedmann-Morvinski, a cell biologist at Tel Aviv University in Israel. “Our contribution to the field is (revealing) this mechanism by which obesity induces the activation of MMP-2 in the hypothalamus, which impairs the subsequent leptin-signaling cascade.” 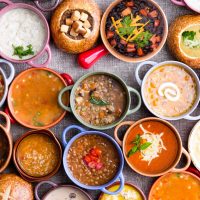 The secret powers of soup

In one of the more unusual studies seen in the medical journals of late, UK researchers have determined ...
Read more