Does insulin resistance cause fibromyalgia?

Researchers led by a team from The University of Texas Medical Branch at Galveston were able to dramatically reduce the pain of fibromyalgia patients with medication that targeted insulin resistance.

This discovery could dramatically alter the way that chronic pain can be identified and managed. Dr. Miguel Pappolla, UTMB professor of neurology, said that although the discovery is very preliminary, it may lead to a revolutionary shift on how fibromyalgia and related forms of chronic pain are treated. The new approach has the potential to save billions of dollars to the health care system and decrease many peoples’ dependence on opiates for pain management.

The UTMB team of researchers, along with collaborators from across the U.S., including the National Institutes of Health, were able for the first time, to separate patients with fibromyalgia from normal individuals using a common blood test for insulin resistance, or pre-diabetes. They then treated the fibromyalgia patients with a medication targeting insulin resistance, which dramatically reduced their pain levels. The study was recently published in PlosOne.

Fibromyalgia is one of the most common conditions causing chronic pain and disability. The global economic impact of fibromyalgia is enormous — in the U.S. alone and related health care costs are about $100 billion each year. Despite extensive research the cause of fibromyalgia is unknown, so there’s no specific diagnostics or therapies for this condition other than pain-reducing drugs.

“Earlier studies discovered that insulin resistance causes dysfunction within the brain’s small blood vessels. Since this issue is also present in fibromyalgia, we investigated whether insulin resistance is the missing link in this disorder,” Pappolla said. “We showed that most — if not all — patients with fibromyalgia can be identified by their A1c levels, which reflects average blood sugar levels over the past two to three months.”

The researchers identified patients who were referred to a subspecialty pain medicine clinic to be treated for widespread muscular/connective tissue pain. All patients who met the criteria for fibromyalgia were separated into smaller groups by age. When compared with age-matched controls, the A1c levels of the fibromyalgia patients were significantly higher.

This week’s expert:
Prof David Hunter, Florance and Cope Chair of Rheumatology and Professor of ... 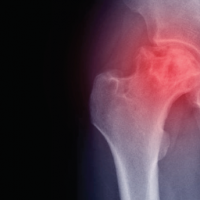 This article discusses the modern guidelines concerning the management of osteoarthritis of the hip and knee.
Read more